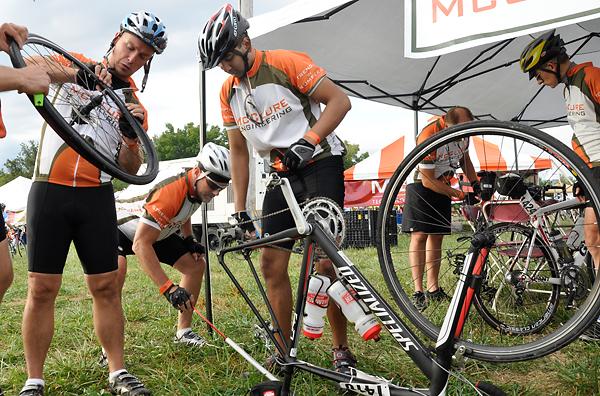 It’s much easier to fix a flat if you first remove the wheel from your bike. Removing the wheel is a 2-step process:

Most brake assemblies sit very close to your wheel rims and use a quick-release system to disconnect and reconnect them. The exact location and design of these release systems will depend on your style of brakes.

Then, Release Your Wheel

Once you’ve disengaged the brake assembly, your wheel is still held to the frame or fork (depending on if it’s the rear or front wheel) by the wheel axle. To release the axle, check to see if you have a quick-release lever—most bikes have this—or a bolt-on nut and then follow the steps below.

Front wheel: Open the quick-release lever and unscrew the securing nut slightly on the opposite side as needed to release the tension holding the wheel in place.

Note: Some bicycles have retention devices designed to hold a wheel in place even when its quick-release lever is open. If your wheel doesn’t pop out after you open the quick-release lever, check the owner’s manual for details on its particular release-and-retention system. Or consult with a bike pro at your local REI.

Rear wheel: Before removing your rear wheel, shift your chain onto the smallest rear cog. To do so, adjust the shifter up then raise your bike and crank the pedals until the gear-shift is complete. Turn the bike upside down, then turn the rear axle quick-release lever until it’s fully open. You may need to unscrew the nut slightly on the opposite side. Pull back on your rear derailleur to give yourself some slack, then lift out the wheel with your other hand. The wheel should pop free without getting tangled in your chain. If your wheel stays put, it’s likely there’s a retention device holding it in place (see the note above).

Drop your bike in for a repair while you wait. Small jobs only.